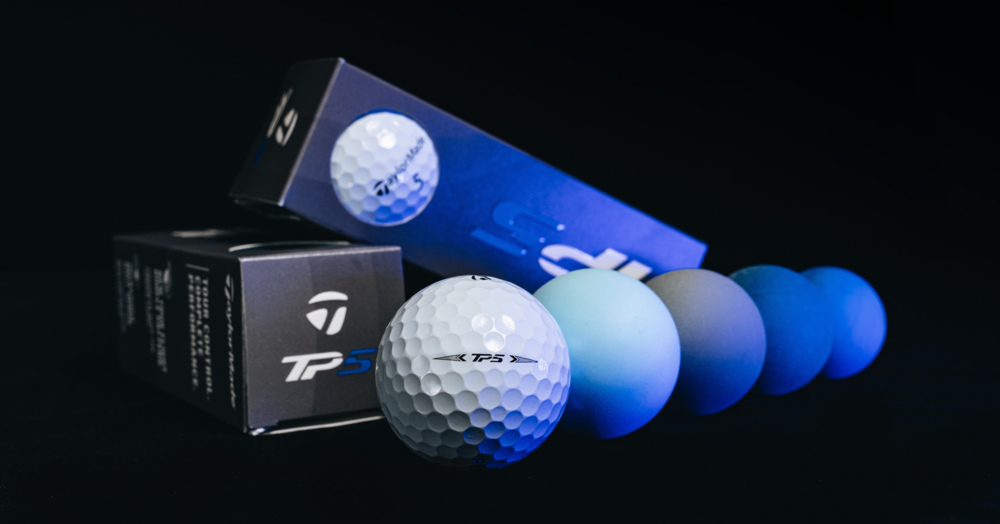 The 5 layers that make up TP5/TP5x work cohesively, functioning like a well-oiled machine to deliver complete tee-to-green performance without sacrifice. The construction is unique to TaylorMade and allows us to create a golf ball that’s designed to produce optimal launch properties both with a driver and with wedge – allowing for high launch/low spin on the driver and the opportunity for controlled launch with high spin on wedge shots.

Many 3-layer balls deliver high OR low spin performance regardless of which club they’re struck with. However, they can struggle to deliver across the board in terms of performance off the tee, on the approach and around the greens. This is where TP5 stands out.

On higher speed shots (drivers/irons) where the ball is significantly compressed, the very soft inner core works in conjunction with progressively stiffer layers and forms what’s known as the Speed-Layer System. The result? Four increasingly stiff layers designed to produce more ball speed, carry distance off the tee, control in the wind and spin around the greens.

On a wedge shot, where there is significantly less compression, the forces of impact are more confined to the two outer layers. The soft cast urethane cover is pinched between the rigid inner cover and the club face, forcing the soft cover into the grooves so that the ball launches with high spin.

Golfers want a golf ball that maximizes their potential for distance and speed on long shots, while also delivering consistency and control around the green. With the driver, it’s important that spin is kept low, and launch is high. It’s the standard equation for hitting the ball far: Low Spin + High Launch = Big Distance. For wedges, it’s important that the golf ball can generate launch angles and spin rates that allow the ball to stop consistently close to the pin. The 5-layer construction of TP5/TP5x allows for both.

Let’s look under the hood and deconstruct TP5/TP5x layer by layer to learn more about how it all works.

As the name suggests, the Tri-Fast Core is comprised of the three inner-most layers of TP5/TP5x. It consists of an extra-large, low-compression inner core and a progressively stiffer outer core and mantle. The combination of these three layers work in conjunction to create lower drag and increased carry. They are the primary reasons TP5 and TP5x deliver breakthrough iron performance and help golfers at nearly every swing speed (over 60 MPH) maximum their carry distances and choose less clubs on the approach.

New for 2021, TP5 (ONLY) features a larger and more reactive core than its predecessor.

The fourth layer of TP5/TP5x is molded from a proprietary material called HFM (High-Flex Material), designed to deliver higher ball speeds through a greater rebound effect. HFM, which is the firmest of all the five layers, acts like a tightly wound spring that builds energy and rebounds quickly, generating more ball speed.

In researching driver and ball interaction at the moment of impact during the development of HFM, engineers discovered that it gives us the ability to more efficiently convert compression into speed, at any swing speed.

This layer also works in conjunction with the soft urethane outer layer, pinching the cover between itself and the clubface to encourage greater interaction between the grooves on the club and the ball, resulting in improved greenside spin.

TP5/TP5x feature a soft yet durable urethane cover that promotes premium feel, performance and enhanced greenside spin. The soft cover material enhances wedge spin by increasing friction between the club face and the golf ball. As the wedge contacts the ball, the cover is pinched between the firm HFM layer and the wedge, helping the grooves better grasp the softer material. Ultimately, this creates more backspin as the club face moves through impact.

New for 2021, TP5x (ONLY) has a slightly softer cast urethane cover that better grips wedge grooves (compared to the prior gen) for increased spin around the greens with lower launch, while remaining the fastest Tour ball in the TaylorMade lineup.